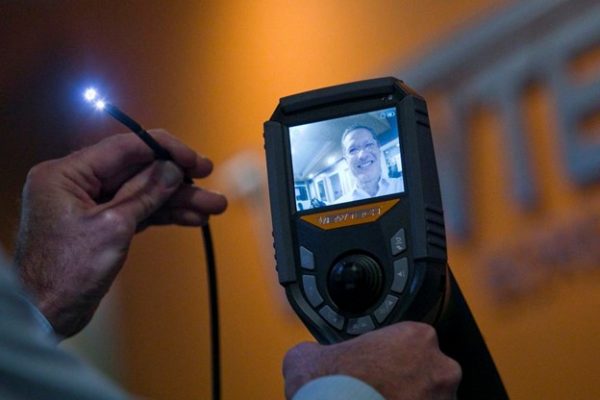 ViewTech Borescopes Founder and General Manager Sean O’Connor is seen on the screen of one of the video borescopes sold by the Traverse City company. photo credit – Record-Eagle/Jan-Michael Stump

TRAVERSE CITY — For a company specializing in looking in difficult places, ViewTech Borescopes is incredibly inconspicuous.
The brick building on Barlow Street sits behind a brick wall bearing the name of the company.

A newly constructed apartment complex sits just north and to the east. Most of the public parking lot traffic comes when people miss the turn for the Michigan Secretary of State office a short distance to the south.

An articulating camera snakes down, back up and out the elongated ‘V’ in the first letter of the company. It’s the only hint that inside is top seller of video borescopes in North America.

But for those who need visually inspect small spaces, the importance of ViewTech Borescopes and its Traverse City office are clear. Because no matter how hard the office may be to locate, those in aviation maintenance and turbine engine inspection know one of the company slogans often shines an LED light on an important issue: “You can’t fix what you can’t see.”

“Anywhere you can use your eye, but you can’t fit your head,” ViewTech Borescopes founder and general manager Sean O’Connor said of another of the company’s expressions.

The handheld device made by ViewTech Borescopes has controls just below a video screen. The tungsten-braided insertion tube comes standard in four different diameters (2.2, 2.8, 3.9 and 6 millimeters) and five different lengths (1, 1.5, 3, 5 and 8 meters). Each unit has an LED light at the end.

The choice depends on the particular task the articulating borescope — called an industrial endoscope in Europe — needs to perform. But in terms of the durability, resolution and size of the light on the end, one rule applies.

“You want to get the shortest insertion tube you can with the largest diameter where you can still perform your inspection,” O’Connor said.
O’Connor said ViewTech Borescopes’ biggest areas of use are in aviation maintenance (20 percent) and power generation (18 percent), but said “all the automobile factories have our scope.”

“We’re busy,” Lechota said. “It’s a very, very handy piece of equipment to have. There are a lot of nooks and crannies in the helicopters and our aircraft and having a video scope lets us get a set of eyes in there where it would be a lot harder to do so otherwise.”

Lechota said he has used ViewTech Borescopes for nearly six years, using and later borrowing one from Aero Med Grand Rapids before purchasing one for the Traverse City office in September, with the added convenience of being able to pick it up in person.

“I was using theirs so much, we got our own,” Lechota said.

Nick Summerland, Health Safety Environmental manager for Lambda Energy Resources in Kalkaska, said the oil and gas industry “has a few different uses” for the ViewTech Borescopes. Summerland said the Houston-headquartered company purchased one this summer to use in Michigan.

“There are a multitude of functions, providing pipe inspection and internal engine inspection, whether it be cylinder heads, piston tops or actual cylinders inside of an engine,” Summerland said.

“It was easy to use. It seems pretty rugged, not that we would abuse it, and able to stand up (to use). It’s something anybody can use, even with short training. I was trained to use it by the salesman in about five minutes.”

Manufactured in a factory in Shenzhen, China, ViewTech Borescopes are sold from the office in Traverse City. O’Connor said Director of Sales and Marketing Duncan White runs the day-to-day operations. Formerly at OneUpWeb, White and the staff of 10 operate as a team using customer relationship management software.

Since a sales staff of four can’t visit all of North America, ViewTech personnel attend nearly two dozen trade shows a year and sends thousands of daily emails to sell the borescope.

O’Connor said ViewTech currently has about 150 demo units in the field for customers to try, which they keep if they decide to purchase.
“Every day there are four to five units going out the door for people to evaluate,” O’Connor said.

ViewTech sells hundreds of its borescopes annually, which O’Connor said “cost several thousand dollars, and prices vary quite a bit based on insertion tube length and diameter.”

And while its use in aviation, turbines, engines and heat exchangers is the norm, some customers use them for unusual applications.

O’Connor said ViewTech Borescopes have been used to inspect the inside of antique violins and even The Spirit of St. Louis, the airplane Charles Lindbergh flew non-stop across the Atlantic Ocean. Quinnipiac University in Connecticut used ViewTech to inspect a mummy.

“People think it’s boring because we only have one product,” O’Connor said. “The cool thing is we’re in so many industries.

“You never know what the next oddball call is going to be,” he said, right before the nearest desk phone chimed.

ViewTech Borescopes started business in 2008 as RF System Lab in Gaylord, where the 53-year-old O’Connor grew up. The company moved to Traverse City in 2012, occupying the Gateway Building for five years before O’Connor bought the building at 1745 Barlow Street in 2017 and changed the name of the company.
ViewTech is in the process of remodeling and expanding its office, going from 3,600 to 6,600 square feet. The remodel is expected to be ready early next year.
O’Connor said the idea for the borescope came from when he worked in the dental equipment industry and was working with a Japanese manufacturer on a wireless oral camera.

O’Connor, who said he loves the research and development portion of the business, said the current ViewTech product is the third generation. He said that as cell phones keep improving, technology continues to trickle down to other applications like the borescope.

“We’re already working on the fourth,” O’Connor said. “The technology is always getting better.”

Decide To Keep It Or Not

RF System Lab was established in 2008 with the goal of bringing affordable, high-quality video borescopes to the market.

Learn More About the VJ-3

Check the box in the form below and one of our representatives will arrange a free demo unit.

Fill out the form below and one of our representatives will contact you.